Finally I got around making the header for the site I am building. After walking around with this idea in my head for weeks, it turned out the way I hoped it would. It is an existing font called KG Always a Good time, found on the 1001 fonts website. After first printing “breien in oost”, I traced the outlines of the letters with a marker, then changed some details that I didn’t like and filled the outlines with a ”yarn-structure”. Next I scanned the drawing and spent an impressive amount of hours colouring  the yarn structure inside the letters, almost pixel by pixel.

I had hoped that I would be able to use the same font for all other headings on my site, but the fonts that can be used on WordPress are limited to another font source only. Well, I also spent impressive amounts of time searching all the available WordPress themes, to see what they can do and what not. More can be done when you pay for an upgrade, but I don’t think upgrading will allow me to use the font of my choice. And I prefer to create the whole thing without spending money anyway.

The theme I used before – Vostok – was and still is very pretty, but  its navigation possibilities are limited and it doesn’t have features like a sidebar or multiple columns. So I switched to this theme called Visual. I like the way it presents the blog posts and the menu shows very clearly . Unfortunately I had adjusted the colors in the logo to the Vostok theme and had to adjust some of the colors again. The next challenge will be my attempt to make the site bi-lingual, Dutch and English. And I will have to move the web site to a self-hosted place so that the domain name will be breieninoost.nl. Apart from that I am done with the design and I hope to focus on content soon. It will be about knitting (and some crochet as well)!

Today I looked at possible fonts, way ahead of my technical capabilities, because with WordPress I cannot even choose a single different font yet.

Nevertheless I have the ambition to do something nice with fonts on my website and I found this great site with hundreds of fonts:

Most of them are for free when you don’t use them commercially and it is really easy to download and install them.

You can search with great tags such as: chunky, vintage, 1970s, art deco, and on and on. T0he categories are endless.

What is even more exciting is the possibility to upload your own font. I want to make a font of my own handwriting! I haven’t tried yet how easy or difficult that  is, first need a scanner probably. I ordered one, it is supposed to arrive soon. 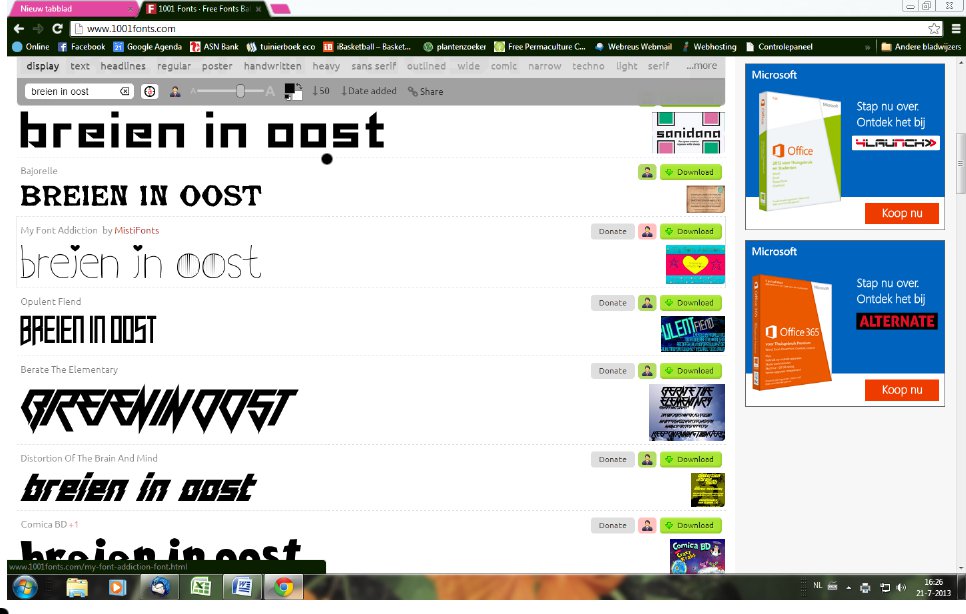